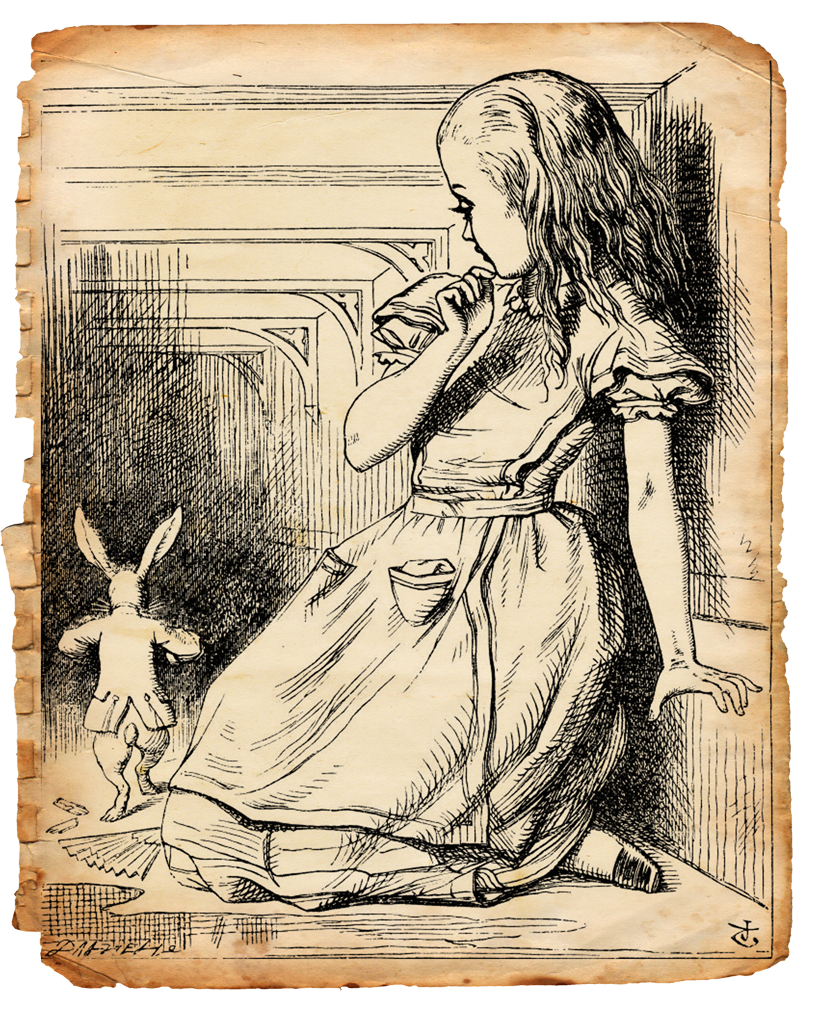 Alice took up the fan and gloves, and, as the hall was very hot, she kept fanning herself all the time she went on talking: 'Dear, dear! How queer everything is to-day! And yesterday things went on just as usual. I wonder if I've been changed in the night? Let me think: was I the same when I got up this morning? I almost think I can remember feeling a little different. But if I'm not the same, the next question is, Who in the world am I? Ah, THAT'S the great puzzle!' And she began thinking over all the children she knew that were of the same age as herself, to see if she could have been changed for any of them.

"I'm sure I'm not Ada," she said, "for her hair goes in such long ringlets, and mine doesn't go in ringlets at all; and I'm sure I can't be Mabel, for I know all sorts of things, and she, oh! she knows such a very little! Besides, SHE'S she, and I'm I, and--oh dear, how puzzling it all is! I'll try if I know all the things I used to know. Let me see: four times five is twelve, and four times six is thirteen, and four times seven is--oh dear! I shall never get to twenty at that rate! However, the Multiplication Table doesn't signify:...

After reading "Alice's Adventures in Wonderland," our robots decided to create their own "Multiplication table." Stephan would lead this mission (yeah, that probably was a bad idea). He forgot how to do multiplication and tried to invent a new method. It’s a rather strange method if we may be so blunt.

In Stephan's version of multiplication, we convert numbers to binary representation without leading zeroes. Then the first number is written vertically (up to down) and the second horizontally (left to right). With that, we fill a table with various binary operations for each crossing -- AND, OR, XOR, so we end up with three tables. In each table we convert rows to decimal and summarize it, then summarize the results of three tables. Let's look at several examples.

You should help Stephan write a function to calculate this "multiplication". You are given two positive integers (n > 0), be careful with order of arguments.

Output: The result of the Stephan's "multiplication", an integer.

How it is used: In this task we play around with logical binary operations, the basis for computer science. Maybe you can find a use for this subject in cryptography?