An IP network is a set of routers that communicate routing information using a protocol. A router is uniquely identified by an IP address.
In IPv4, an IP address consists of 32 bits, canonically represented as 4 decimal numbers of 8 bits each. The decimal numbers range from 0 (00000000) to 255 (11111111).
Each router has a "routing table" that contains a list of IP addresses, for the router to know where to send IP packets. 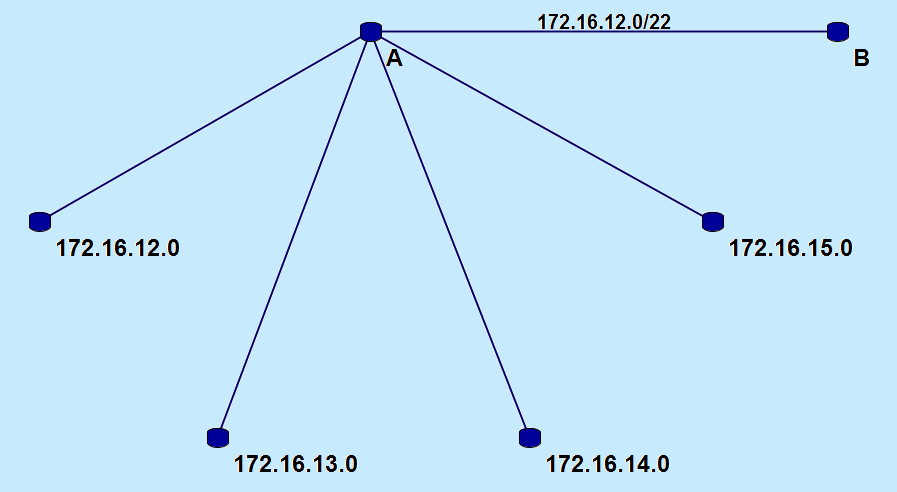 We have 4 routers connected to A . A is aware about all 4 IP addresses, because it has a direct interface to each of them. However, A will not send them all to B .
Instead, it will aggregate the addresses into a summary route, and send this new route to B .
This implies that:

A has all 4 addresses stored in its routing table.

A will convert these IP addresses to binary format, align them and find the boundary line between the common prefix on the left (highlighted in red), and the remaining bits on the right.

Input: A list of strings containing the IP addresses

Output: A string containing the summary route, represented as an IP address, followed by a slash and the subnet.

Free accounts will see Best CheckiO solutions with some delay.
Best Solutions will be opened in
Become Awesome and Don't wait
The next stage is ""
Will be activated in
View More Solutions Random Review Solutions Go to the next mission
Back to the list of missions | Back to the map | Settings
Dropbox
← Prev Next →
0
0 %
Share:
Fresh Awesome