Over the past almost 15 years, 3D printing has become very popular, not only amongst the big industrial companies which can afford to buy a super expensive 3D manufacturing complex (e.i. SLM or SLS machines), but also among ordinary people, engineers and enthusiasts. It started in 2005 with the RepRap project within the University of Bath. The project's main objective was to develop an affordable production system that would enable the production of cheap everyday household goods regardless of the household's location. The project was successful and gave birth to the printer called "Darwin" at the beginning of 2008. It was a fully open project under the GNU GPL and by the end of 2008th ~100 copies of "Darwin" have been produced in various countries. Since then, there has been an exponential increase in the number of printers manufactured, both DIY and commercial. Most of the FDM printers you may find today in libraries, universities, workshops, engineering companies, friend's houses are likely to be direct descendants of that very first desktop printer. I do not possess any more up to date information, but in 2013 it's been sold ~72.000 of desktop printers, in 2014 - almost 140.000 (according to the Wohlers Report ).

Leaving aside the 3D design process, which is the first step on the way to something to be printed, we go straight to preparing a 3D model for printing. There's a variety of software applications designed for that purpose called slicers . They slice a 3D model from the bottom to the top with a constant (not always) height and get a sequence of the planar contours, each of which is represented by a sequence of the dots. 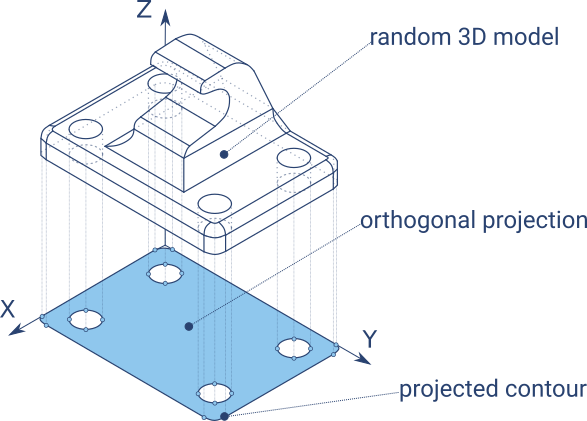 These sequences of dots then, obvious, are used for a printing program along with the calculated velocities, accelerations, etc. In order to estimate if a model fits the printer building table (video) and then can be printed, our slicing software should find the optimal orientation of the model on the table, so the model will require the least possible space.
So, in this mission you are given a list of dots, each represents a projection of a 3D model vertex onto a horizontal plane. Your task is to find the smallest rectangle (by its area) into which all the given dots (and thus the projected contour) can be inscribed.


Input: A list of tuples, each tuple contains coordinates of a projected dot (x, y). All given coordinates are integers. Although in the example illustrations the dots are connected, forming sane contours, they can be connected in any arbitrary consequence and that won't affect the result.

Output: The area of the smallest rectangle (with ±0.001 precision) which inscribes the given contour.

28
quarkov
Login to vote
Solve as a guest
Sign in to your account
Settings
Code: Other:
Save & Reload Close
CheckiO Extensions

Free accounts will see Best CheckiO solutions with some delay.
Best Solutions will be opened in
Become Awesome and Don't wait
The next stage is ""
Will be activated in
View More Solutions Random Review Solutions Go to the next mission
Back to the list of missions | Back to the map | Settings
HubSpot
0
0 %
Share:
Fresh Awesome