This is the second in a series of missions dedicated to classical cryptography. In this mission we will try to break the Scytale encryption. 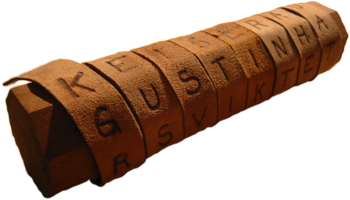 Vykers
Login to vote
Solve as a guest
Sign in to your account
Settings
Code:
Save & Reload Close
CheckiO Extensions

Use Promo Code HAPPY2022 before February 1st to buy One Year Awesome with a 40% discount.
Let's make the year 2022 - the year of code.
Free accounts will see Best CheckiO solutions with some delay.
Best Solutions will be opened in
Become Awesome and Don't wait
The next stage is ""
Will be activated in
View More Solutions Random Review Solutions Share your own solution Go to the next mission
Back to the map | Settings
Dropbox
0
0 %
Share:
Player of the Month