Sometimes damaged nodes are unrecoverable. In that case, people that were connected to the crushed node must migrate to another district while administration attempts to fix the node.

But if a crushed node disconnects multiple districts from one another, then the network splits into two sub-networks and every sub-network should have their own Mayor. And Mayors must use pigeons for mailing between each other. In that case, when the network is split you don’t need hundreds of pigeons. 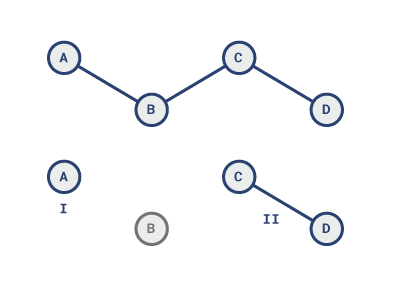 Input: Two arguments: the network structure (as a list of connections between the nodes) and the list of crashed nodes.

Output: Int. The amount of sub-networks formed after some nodes were crushed.

38
oduvan
Login to vote
Solve as a guest
Sign in to your account
Settings
Code: Other:
Save & Reload Close
CheckiO Extensions

Free accounts will see Best CheckiO solutions with some delay.
Best Solutions will be opened in
Become Awesome and Don't wait
The next stage is ""
Will be activated in
View More Solutions Random Review Solutions Go to the next mission
Back to the list of missions | Back to the map | Settings
HubSpot
0
0 %
Share:
Player of the Month